By Erik Dolson and Jane Miller

There were 23 people left on six boats when Sail Alaska returned to Ketchikan. Everyone showed up for the formal good-bye dinner at Cape Fox restaurant. Ivy the waitress laughed and teased as she took orders for drinks and entrees in a crowded restaurant made more so by the size of this group.

As usual, talk was about boat parts and repairs, like the transmission that worked well when cold but slipped when hot and at low rpm; about salmon and halibut caught; and about the torrential rain and wind that assailed the fleet as they approached Ketchikan’s docks. New crew members joining the fleet brought stories of who they were and how they were related to Sail Alaska.

Jim Rard wasn’t exactly sure when he’d be leaving. That transmission problem was vexing and important to fix before the owners of the sailboat could begin their trip hundreds of miles south. While the transmission had been recently rebuilt, it started having trouble going into forward gear early in the trip.

With the rebuild manual in hand, Jim and boat owner Stan dove into the problem to see what could be done in the field. The problem turned out to be shims on the shift mechanism that were not up to the job. They found shims that might work, Stan was shown how to change shims and adjust the shift lever, and the decision was made to carry on. After all it’s a sailboat, and it was in Alaska.

The latest report has the transmission is still limping along, the boat and the hardy crew two days from their home slip with great stories of sailing and making do in the wilderness.

A storm was coming as well, with high winds and swells off the Pacific threatening to make crossing Dixon Entrance unpleasant, if not dangerous. Some boats planned to leave at first light on Monday morning to beat the weather; others chose to cross later in the week when conditions would improve.

Faster boats decided to make the 88–mile slog to Prince Rupert and Canada in one day; others chose to break it into a two-day journey.

“Sail Alaska” was over, the fleet dispersed to experience individual adventures. Some would reverse the trip already taken, but from north to south through the same passages and in the same anchorages. Others would head out in new directions, crossing paths again only by rendezvous or happenstance.

A new stopover for one boat was Baker Inlet off Grenville Channel, with an extremely narrow and nearly hidden entrance that wound between hard granite walls. The current there can run nearly as fast as a boat can motor, so it’s best to traverse at slack. Being pushed through with rocks on each side can be hazardous. An unknown voice on the radio warned that the GPS might not give an accurate position.

Once through the narrows, though, Baker Inlet opened up into a long, wide fjord with high walls that protect from a storm. Away from the wind of 22 knots and waves in the channel, inlet water hundreds of feet deep reflected like glass granite cliffs that leapt upward a thousand feet before disappearing into cloud.

Two wolves appeared on the banks, then loped along the shore as the sailboat made its way to anchor in shallow headwaters. A seal silently slipped through the bay while a young eagle stood on the bank looking for fish. A loon called from someplace unseen. Magical.

A couple of boats returned to Lowe Inlet, where the group had seen the first wolf nearly six weeks before. This time, they watched a bear at the falls roaring into the bay. The bear stood at the edge of the rushing water for many minutes, staring into the froth. Suddenly a salmon leaped and the bear struck, catching the fish in midair. Unforgettable.

The radio that for weeks had been animated by Sail Alaska chatter was silent.  Jim Rard had returned by plane to his business in Anacortes and Seattle, his boat Ruby Slippers brought back by others.

On that journey, Ruby Slippers heaved suddenly to one side. Wondering if they’d hit an uncharted shoal, the crew looked about and saw a whale surface just at their stern. Who hit who? Incredible. 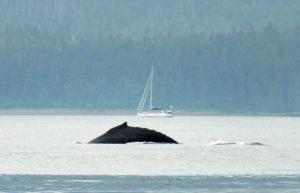 “There are so many stories,” Rard said. “Each year is different.” Next year’s trip is already being planned and boats are lined up.

Rard returns to the waters of Southeast Alaska year after year, not as a guide but as a friend who shares his knowledge of the straits and channels and rivers with fish, and then more fish, of forests with bears and wolves, of mountains of ice. He returns aboard Ruby Slippers year after year to a place he loves that must feel almost like home.

Come Sail with Us!